‘Rant’ is available as a paperback or for Kindle:  http://amzn.to/1UHhXwe

Across the nation the election was on a knife-edge. In Chipping Bonhunt it was murder.

A councillor has gone missing and young Chloe Gatiss makes a gruesome discovery in the old railway cutting. Has the battle over all the proposed new housing turned nasty?  When a developer lies to the police and another councillor is attacked in broad daylight, Inspector Wendy Pepper has to work out who profits from this mayhem.

Meanwhile, in Norfolk a terrified prisoner awaits their fate.

Richard Fisher’s first novel, ‘The Purging’, was published in October 2014 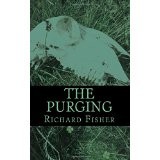 ‘The Purging,’ is available as a paperback or for Kindle on Amazon.

“Fisher’s tightly plotted detective story teases the reader with red herrings before coming to an unimaginable but entirely plausible conclusion”
Fiona Hook, Church Times book review, 15th May 2015
It’s mid-August in Chipping Bonhunt. Many of the local children are attending Summer Bible Club and at Bonhunt Academy students are anxiously awaiting their A-level results.
It’s a busy time for Inspector Wendy Pepper. An arson attack on the Friends’ Meeting House is followed by a hit and run in the Market Place. Is it an accident or deliberate?
When the victim of a gruesome murder is discovered she realises that this could be part of something much more sinister.

Beneath the surface of this pleasant North Essex Market Town a deeply disturbed individual is planning retribution on a scale that nobody could possibly foresee.